The Honeysuckle plant can reach a length of up to 30 feet, but it would take 5-10 years to reach such a length. On average, Honeysuckle can grow 9-12 feet every year.

Is Honeysuckle A Fast Climber?

What Is The Most Popular Garden Honeysuckle?

Will Honeysuckle Climb A Fence?

Honeysuckle is a beautiful climbing plant. It can climb walls, fences, trellis, and even sides of buildings if encouraged to. Encouraging this activity will require some training, but it’s easy to do and the results are beautiful!

Is Honeysuckle A Climbing Plant?

Honeysuckle is a climber, and it can grow up to 9-12 feet per year, spreading out 3-6 feet annually, and as tall as 30 feet high! It’s a great addition to fences, trellis, or even garden walls.

How Much Will Honeysuckle Grow In A Year?

Growth will always depend on the species of a plant, but on average a Honeysuckle plant can grow up to 12 feet per year!

It can grow tall, it can grow bushy, or it can climb. Some species are more invasive and will grow more than this. Research what species you want to plant so you have a good idea of how much growth and spread to expect.

Does Honeysuckle Come Back Every Year?

Honeysuckle is a perennial plant, so it will continue to come back each year. There are some varieties of the species that can live an average of 20 years, allowing a gardener to enjoy the flowering vines for a long time.

How Do You Encourage A Honeysuckle Plant To Climb?

If you’re interested in seeing your Honeysuckle climb, you can encourage it by somehow tying it to the trellis, fence, wall, etc with something that won’t cut into the plant as it grows. As long as it has room to grow, it should begin to climb the structure you train it to.

Where Is The Best Place To Plant Honeysuckle?

Honeysuckles prefer full sun, well-draining soil (neutral or slightly acidic). The more sun the plant gets, the more blooms you’ll get to enjoy during the growing season. If you give it something to climb, you’ll see even more blooms.

What Are Favorable Conditions For Honeysuckle?

Is Honeysuckle Easy To Grow?

There are over 180 Honeysuckle species, so depending on the species, the soil it’s planted in, and the climate, it can be easy to grow. They’re generally hardy, so most of the species won’t have much trouble growing where they’re planted.

Can You Eat Honeysuckle Flowers?

Honeysuckle flowers are non-toxic and can be used for a few different things, including ornamental garnishes, teas, and they’re even used in spirits for flavoring.

What Does Honeysuckle Attract?

There are numerous species of the Honeysuckle plant, with different color variations. The Coral Honeysuckle is red, which honeybees can’t see, so it attracts butterflies, moths, birds, and hummingbirds. Other species of the plant are white to yellow, which attracts more honeybees than birds.

When Does Honeysuckle Bloom?

The number of blooms you get, the duration of the blooming season, and the color of the blooms will all depend on the species of Honeysuckle you choose to add to your garden. Coral Honeysuckle flowers during a large portion of the growing season but aren’t quite as invasive as other species.

Honeysuckle, when left to take over what space it will, can be an invasive plant. Some species are more invasive than others, and some that are less. Depending on the species, they can grow up to 30 feet, if left alone over some time.

Can You Eat The Berries Of A Honeysuckle Plant?

Some Honeysuckle species have edible berries, but for the most part, the berries of a Honeysuckle plant are slightly poisonous. If it’s a wild Honeysuckle plant, it would probably be unwise to consume them without knowing the species.

Will Honeysuckle Grow On A Wall?

Honeysuckles are wonderful for covering walls, fences, trellis, and even sides of buildings with a little training. They’re wonderful climbers, and they’re beautiful cottage-style decorations during the growing season.

Should I Prune Honeysuckle?

If you’re trying to train Honeysuckle to climb, you can prune and direct the vines how you like, but really, Honeysuckle doesn’t need much pruning. Pruning will cause the plant to become thicker and bushier. If that’s the goal, prune away!

Can I Train Honeysuckle On A Trellis?

To train Honeysuckle on a trellis, you’ll want to somehow tie the plant to the trellis to give it direction. If you’re tying it to the trellis, it’s best to use something that will stretch or allow for growth so that it doesn’t cut into the plant as it climbs and gets bigger.

Can I Grow Honeysuckle Indoors?

Honeysuckles require room for growth (growing up to 12 feet per year!), but it’s possible to bring them inside. They will need lots of sunlight and something to climb. You can add a trellis to the pot to encourage climbing. They should be watered about once a week.

Deer are fans of the Honeysuckle plant. If the plant is fertilized, they’ll be even more attracted to it due to the increased nectar the plant will produce. Deer may eat the plant to the ground if they can. They eat the berries, the flowers, and even the stalks. They spread the plant’s seed when they eat the berry and defecate the seeds. Caladium plants are great for indoor decoration due to their beautiful foliage. These plants are the right choice for shady… The stunning foliage of an Alocasia plant will always increase the beauty of your indoor space. It is needless to… 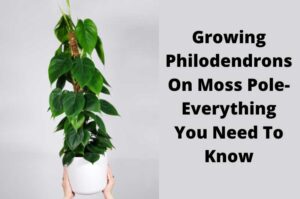 Philodendrons are something that we all love. So, who do we grow these Philodendrons with? Is a moss pole the… Do you love sitting cozy in front of bonfires or roaring fireplaces during freezing winters? If yes, then you’ll probably… Staghorn ferns are native to Australia and have a large trunk, with fronds coming out at different angles. Each frond… Have you brought a new plant baby? Are you planning to bottom-water your new plant? And overwhelmed due to various…