Zinnias are one of the most popular plants among gardening enthusiasts and have many varieties. Zinnias are known for their beautiful flowers and are found in various parts of the world. However people often search about the growing periods of Zinnias, are they annual or perennial or do they come back every year?

All these questions will be answered in this article. So the main question is Do zinnias come back every year? Here is the answer

No, Zinnias do not come back every year as they are annual plants. This means that they have a life span of a year, within which they grow, produce new seeds, and die.

The basics about Zinnias

Zinnias are found in dry soil, filled with scrubs and dry grass, and are mainly found in the various parts of America, namely, in an area stretching from the Southwestern United States of America to South America. It is also found in some parts of Mexico.

The flowers have long stems and come in various attractive colors. This article is aimed at answering a frequently asked question about Zinnias, which is, whether they come back every year or not.

Do Zinnias come back every year?

As mentioned earlier, Zinnias have a lifespan of only a year, and are, thus, annual plants. Once the seeds are planted, the plants grow, bear flowers, and die, all within a year.

No, Zinnias don’t come back every year by themselves, rather their seeds can be collected to grow new plants every year. Zinnias are vulnerable to frost and die easily just after the first frost, at the beginning of winter.

Zinnias are in full bloom in the late summer months, and they are pretty easy to sow and take care of. Despite being low maintenance, various things need to be taken proper care of when it comes to Zinnias, and there are certain procedures and ways that need to be followed closely.

The biggest advantage of planting Zinnias is that they produce an ample amount of seeds for the planting of further batches of Zinnias.

A useful tip that one might follow while growing Zinnias or planning it is that if one sows a round of seeds each week or so, for quite a few weeks, then, it will increase the flowering period of the Zinnias.

Zinnias do not survive the winter as they are vulnerable to frost and die right after the first frost. Therefore, they should not be planted during winter as that will only kill the plant before it can grow. One should wait for the winter to end.

Zinnias belong to the sunflower family and require full sun to bloom. They are in full bloom either in the late summer months or in fall.

As Zinnias should not be planted before the last frost has passed, one should check the local frost dates before planting Zinnias. When it comes to figures, Zinnias require a minimum daytime temperature of around 16° C, that is, 60° F. However, the most preferred range of temperature of Zinnias is around 23°-28° C, that is, 74°-84° F.

What happens to Zinnias in winter?

Zinnias bloom in the late summer-fall or early winter but die right after the first frost and thus, should not be planted during the winter, and should only be planted in summer or after the last frost has passed in winter.

Zinnias need full sun to bloom and fortunately, do not require much supplementary watering and can make do with the water that they obtain from the soil by themselves.

They are not affected by droughts as they grow in dry soil, with scrubs and dry grass. However, as one might have already noticed, time is of the essence while planting Zinnia seeds, so that they actually survive.

Should Zinnias be cut back?

It should be noted that pruning is very essential if you are growing Zinnias and that Zinnias thrive on the process of pruning. Regular pruning of Zinnias promotes the healthy growth of the plant.

The pruning of Zinnias is not a necessarily difficult task in gardening but you must be well aware of what you are doing so that you do not make mistakes and end up harming the plant in the process. One of the most pruning procedures that you might follow is deadheading.

Will Zinnias rebloom after cutting?

Yes, Zinnias rebloom after cutting as they are termed as a “cut and come back” type of plant, that is, once they are cut, they grow again. If the cutting is done hard, the Zinnias will respond accordingly by growing even longer and stronger stems, and thus, cutting the Zinnias in the proper way, is important if one wants to facilitate their growth.

Zinnias are cut directly into clean, fresh, water, and this is done with a drop of chlorine as well. They require full sun to bloom, and when they are stored, they are not stored in the sun but in a cool, dark corner. If the steps are followed correctly, one might be able to obtain fully blooming stems that will last up to a week or even more in a flower vase.

Where do I cut Zinnias for regrowth?

The cutting back of Zinnias is a process that requires expertise and one needs to know where Zinnias can be cut off to facilitate regrowth and the production of newer, stronger, and long stems. There’s a certain part of the plant where it must be cut back for the plant to regrow. The trick is to pinch the Zinnias when they are still young and this must be done carefully.

This requires the top of the plant to be clipped off, right above the set of the plant’s leaves, when the plant has a height somewhere between 8-12 inches. Cutting back Zinnias is a delicate process that requires precision and a clear sense of measurement and must be done with the utmost care, or else, this process might end up hampering the growth of the plant.

Should I deadhead Zinnias?

The deadheading of Zinnias prolongs the blooming period of Zinnias and thus, helps to produce more flowers, over a relatively long period. Deadheading encourages the plant to keep blooming and grow newer, stronger, and longer stems where they have been cut. They don’t require mulching but deadheading is necessary as it helps to increase the production of flowers.

How long does a Zinnia plant last?

As an annual plant, the Zinnia plant lasts for an entire year. That is, it grows, produces flowers, seeds and then dies within the period of a year.

Zinnias should be planted just after the last frost has passed and grown for a year, and bloom in late summer or fall, or the early winter of the next year. They should be pruned from time to time so that the blooming period increases and more flowers are produced. They are called “cut and come back” plants are they are cut and then grow again.

How do you harvest Zinnia seeds for the next year?

As already mentioned multiple times, Zinnias produce seeds that can be planted next year to produce new plants that will in turn produce more flowers. Now, the fact that must be taken note of is that Zinnias have some of their seeds attached to the petals of the Zinnia flowers themselves.

The seeds are found to be forming at the base of each petal and the flowers are classified as ray florets. The process of collection of the seeds is unique. Each petal is pulled out of the dried Zinnia flower to expose these seeds that are known for their unique shape. Zinnia seeds are shaped like tiny arrowheads and are pretty easy to separate from the petal.

Sometimes, the plants become very dry and the petals also dry off, break off from the plant and leave the seeds inside the flower itself.

Zinnias may predominantly be low maintenance but still require some care and certain things must be maintained when growing Zinnias such as the pH level of the soil, the sunlight it is exposed to, the care it is subjected to in terms of pruning and deadheading, and so on.

Zinnias prefer soil that is dry and has a pH level somewhere between 5.5 and 7.5. That means it prefers slightly alkaline soil. The soil should be dry but be rich in hummus and should not retain much water. The pot should be of medium size and both clay and ceramic are appropriate for growing Zinnias.

The seeds should be planted a quarter-inch deep into the soil and there should be a space of at least 4-24 inches between each place where the seeds are placed. Pebbles of different colors can be used to increase the overall attractive appearance of the Zinnias. The seeds should be collected deftly so that new batches of Zinnias can be grown next year too.

Zinnias cannot be termed as  “useful” as such, besides producing beautiful colorful flowers. However, they have certain characteristics that are deemed desirable.

Zinnias are known for being popular flowering plants and various interspecific hybrids are becoming increasingly common and well known. Since Zinnias are known to have various characteristics and habits, they come in handy in various parts of a garden.

Zinnias tend to attract hummingbirds and insects and thus, they can prove to be quite useful. Thus, Zinnias aid pollination, not only of themselves but also of other plants around them, benefitting the plants greatly. Some varieties of Zinnias are edible too.

When it comes to the fertilizer, a balanced 10-10-10 fertilizer or a 6-6-6 fertilizer. One pound of fertilizer should be applied per 100 square feet and this is for the first spring planting application.

Thus, various things must be taken care of when growing Zinnias even though they are generally low maintenance plants that more or less grow on their own. The greatest advantage of growing Zinnias is that they produce a large number of seeds and thus, each plant subsequently results in the creation of a lot of other Zinnias.

And last but not the least, one must remember to keep the Zinnias moist but not wet and fertilize them occasionally. And, in no time, will you have a garden full of colorful Zinnias that will definitely make you proud of your little nature reserve. Golden pothos also called the Devil’s Ivy, is most probably the most accepted houseplant by the indoor plant enthusiasts around… 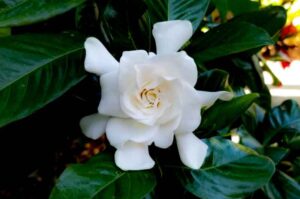 A Gardenia bloom is stunning to look at, and the smell is equally delightful. Beautifully grown Gardenia flowers entice passers-by… Staghorn fern (Platycerium bifurcation) have increasingly become popular as house plants. They can either be mounted or hung on a… Experts say that it is safe to eat a tomato that is greenish on the inside. The greenish gel can…